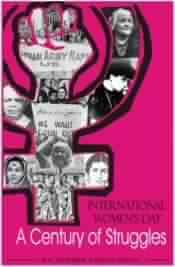 2010-2011 marks the Centenary Year of International Women’s Day. Every year on 8 March, we find Central and State Governments in India as well as Governments all over the world making pronouncements in favour of women. The market and media tend to project it as a day for men to buy women ‘gifts’ – reducing IWD to a meaningless and inane commercial event. Governments talk of women’s ‘empowerment’ – while all the time strengthening the social and economic structures that dis-empower women! In the newspapers and TV channels, and in the words of the heads of Governments, there is no hint of the actual history of International Women’s Day.

Was it the United Nations which began the tradition of IWD? Was it any government? Or was it ordinary, toiling women themselves who created history by choosing a day to mark their aspirations and demands for equality and freedom? When we celebrate a 100 years of IWD, what exactly are we commemorating and celebrating?