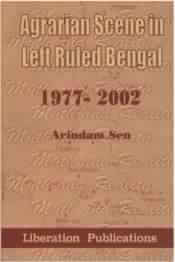 This article, first published in Liberation Annual Nutnebr 2002, has been updated on the basis of two important documents released in May 2002 : (a) Document of the 20th State Conference of CPI(M) held in February 2002 and (b) Draft Agrarian Policy Document of the West Bengal Government.)

BOTH ADMIRERS and critics of the Left Front Government (LFG) concur that its spectacular success in holding on to power rests on its achievements on the agrarian front — on its solid rural base. On 21 June 2002, the LFG completed 25 years in office; would it not be in the fitness of things to use this occasion to make a fair assessment of its agrarian programme and to examine the emerging trends in political economy and class relations in the Left-ruled state which boasts the most stable government in India?